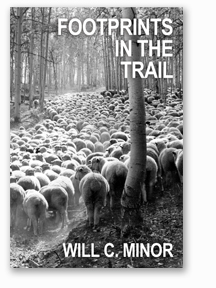 Footprints in the Trail
(Spring 2020)

I first heard of Will Minor’s book, Footprints in the Trail, from my friend Bob Sherrill, a retired geologist and science teacher, who lives in the canyons west of Fruita. I was immediately taken by Minor’s terrific curiosity, careful observation, and his joyful, intelligent, and continually illuminating prose. Minor saw the natural world and its inhabitants through eyes that spent most of their years outdoors as he tended sheep in the river valleys and high pastures adjacent to the Grand Valley. His ever engaging stories give us a glimpse not only into the western Colorado of last century but into the world that existed before ubiquitous electronic screens came to occupy so much of our vision.

Over the years we consistently sold expensive, hard to find copies of the long out-of-print book in the Lithic Bookstore, which led to the thought of republishing. Kent Tompkins regaled us with memories of sitting in Minor’s small home in Fruita listening to stories through the day and into the night during his childhood in the 1960’s. Tompkins and Steve Hight provided the photograph that appears on the cover; we believe Minor was the photographer, though we cannot be sure. Bob Silbernagel, a Grand Junction writer and historian, who had written about Minor in one of his frequent articles in the Grand Junction Daily Sentinel, graciously agreed to write an introduction.

An intern from Colorado Mesa University, Abigail Garton, typed the manuscript into a Word document. However, as Kyle Harvey began the layout, it became clear that we must include all the wonderful drawings by Rosemary Emerson. The best way to achieve this was to scan the entire book, making the final product a facsimile of its last printing in 1973. Kudos to Kyle for his painstaking work ‘fixing up’ the scanned pages, letter by letter, page by page. I am delighted this book is available again and hope it will encourage people to get outside, look closely as the days go by, and revel in the splendor of the non-human environment that surrounds us and makes it so exhilarating to live in western Colorado.  –Danny Rosen, Lithic Press