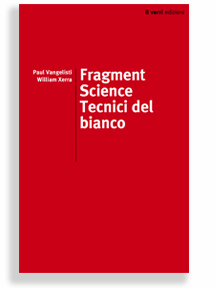 A collection of William Xerra artwork and paul vangelisti poems - in italian and english - in shadows and light - in mostly white space with ink only where necessary - los angeles light and tuscan light - oceanic and planetary - space defined by what is not there - expressions of interior and exterior - an expansive exploration of restraint - silence reigns as an exercise in breaking the silence - something true in a world of accidental intentions - deceptively straightforward - fragments of joy for the long haul - a book to hold again and again.

Paul Vangelisti has published more than thirty books of poetry and is a noted translator from Italian. In 2015 he edited Amiri Baraka’s S.O.S.: Poems 1961-2013, for Grove Atlantic, and later this year a bilingual edition of his poems, Imperfect Music, will be forthcoming from Edizioni Galleria Mazzoli in Modena (Italy). In 2006, Lucia Re’s and his translation of Amelia Rosselli’s War Variations won both the Premio Flaiano in Italy and the PEN-USA Award for Translation; while his translation of Adriano Spatola’s The Position of Things: Collected Poems, 1961-1992 received the Academy of American Poets translation prize in 2010. Vangelisti lives and works in Los Angeles.

William Xerra (Florence, 1937) is one of the most important artists in the panorama of Italian contemporary art. A personal exhibition, “Enigmi di volti assenti”, presents a series of works in which the protagonists are profiles of faces, silhouettes drawn or more often cut in papers of various natures and functions (maps , music papers), which overlap, look at each other or oppose each other, but who are always sign of mystery, of an impossible, absent dialogue. From his beginnings as a painter in the 1960’s, in the name of the poetic of the informal, Xerra began to explore the territories of the most varied artistic experiences, with some constants coming back, such as the persistent attachment to the outline and color, the adoption of writing (the artist has always been linked to poets and writers, including some of the ‘63 Group, he was visual poetry events, and some of the books and catalogs of his exhibitions were conceived by him as a book-object, limited edition) and the salvage of images of the most varied cultural productions.