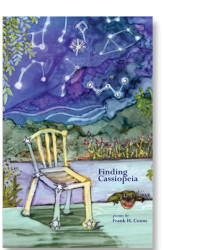 Finding Cassiopeia is the first collection of poems from Frank H. Coons, who has worked as a veterinarian for 35 years. His poems are filled with his experience as an animal doctor as well as memories of family life and general thoughts on the nature of the world. *Colorado Book Award Finalist*

Passing of a Rural Cat

I caught in his eyes
the lingering malcontent-
or was this contempt
for a world that imagined
him domesticated.
Still he survived
not because of hate, but fear.
He's lived his years
near, but not behind the gate,
relied on predatory skills
and camouflage,
not that he'd retreate
from kibble bowls,
but no one ever saw him eat
that dry and bitter gruel.
Now I stand before this frail
remainder who's near the end.
He has no misconceptions.
I am not his saviour
nor this unclean cage, his coffin.
A final hiss confirms his wish
to have passed away unseen
in greening pastures.
As for me, I will ensure
his quick demise, but do not presume
to be his friend, or even kind,
or sure of anyone's hereafter.