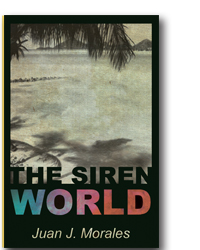 "Juan J. Morales writes: 'It takes a thousand voices to tell a single story,' which is another way of saying, 'It took a thousand journeys to get to mine.' As an artist with Ecuadorian and Puerto Rican bloodlines engaged with the Spanish colonial histories of South America and the Caribbean, Morales explores the legacies of language and landscape, mapping out an expansive poetic portrait of his ancestral homeland. The Siren World is a glorious testimony to the will of the Americas to reconfigure and preserve its cultural identities, which are still thriving and palpable in the heartbeats and 'reconstruction songs' of its native children, its travelers, its bordercrossers, and its poets."

"In The Siren World, Juan J. Morales explores the complexities of identity with grace and humor, passion and irony, arcing across centuries through lessons never learned, voices never heard. Caught between multiple worlds, multiple identities both mistaken and claimed, he offers a unique perspective that challenges many of our assumptions as readers. He may be someone 'who speaks the native tongue' he’s 'never learned,' but he is fluent in the language of poetry. History does indeed come alive in these poems that remind us that we are still living it, and reliving it, moving back, forward, then back again, no matter who we are—and, as Morales reminds us, we’re all still trying to figure that out too."

"The word 'cleave' has two seemingly paradoxical meanings: to divide, and to join. In THE SIREN WORLD, Juan Morales defines a series of distances--from Ecuador to Puerto Rico, from mother to father, from the historical pain of a smallpox victim to the 'failed double-kick flip, ankle's loud pop' of a skateboarding accident. On one page, Pizarro and his generals sort the 'wreckage of job well done,' and on the next we confront 'The Cursing Chorus of the Mob.' But these poems are about bridges, not canyons; they do not gape, they reach. They sing, and they code switch, as in 'Passport': 'When I turned 18, my father gave me a machete. When I turned 21, my father gave me a shoe shine kit.' Morales showcases his striking dexterity of craft, toggling between prose poetry and sonnets, and a genuine search for truth no matter how painful. Yet there is pleasure here too, in the euphoria of the moment, 'When ancestral light circles you and seizes your pen.' I am grateful for this voice, and for this brave and bracing collection."
-Sandra Beasley, author of I WAS THE JUKEBOX

Excerpt from The Siren World:

My mind’s
to pluck new words from the air
is naïve, but I fight how my tongue
twists in awkward positions
until they naturalize to speak.

The world seduces me to be
the conquistador who strips armor on the beach,
consents to clothes
tattering off his frame,
ghosts into foliage,

and when I open my mouth to speak,
English, Spanish,
Quichua, Quechua,
send me careening into
the smashed rocks of language.