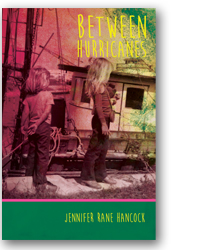 A book of poems arising from the ephemeral sand islands of the Texas Gulf Coast and the wild child Australian outback where Hancock was raised by itinerant artists. From the poem, September, 1976, Calm, "…the girls swayed their terrycloth hips/between hurricanes/and held the railings and crooned/to the dolphins that all was safe…" The poems hearken to the childhood of an almost mythological upbringing. From the milieu of that youth, the poems branch out into the wide world, with stops at the Svalbard Global Seed Vault in Norway, the HAARP antennae array in Gakona, Alaska, a view of Anne Sexton's checkbook in a museum, to the difficult times in New Orleans after Katrina. The book embodies the hard journey into the adult life where, despite everything, the poet comes to grips with being alive in the world. The last lines of the final poem, "…If this had been a test the air/would be alive with sirens/and intent, the whooping cranes/startled but resolute,/the promise of anything/redolent with oleander."

Jennifer Rane Hancock's poems have appeared in the Antioch Review, Spoon River Poetry Review, Crab Orchard Review, and Puerto del Sol. She was nominated for a Pushcart Prize by the editors of Third Coast, and was a finalist for the Wabash Prize from the Sycamore Review. She lives in Grand Junction, Colorado, where she serves on the city's Commission on Arts and Culture and leads a monthly poetry group at the Mesa County Public Library. Jennifer teaches writing and literature at Colorado Mesa University.

Praise for Between Hurricanes:

"I loved this book. When I finished it, I felt awakened and as if I had travelled great distances. Not just because of her varied subjects and tenors, or her impressive stylistic range.  And not just because of the resonant gaps between poems, and sections of poems, that her thematic energies spark across. But rather, because of the distances these poems cover within themselves, their rich relationships between concept and corresponding detail. Top it all off with a keen ear for subtle music and a big heart—you get memorable, mature work by an extraordinary poet."       –Mark Cox

“Jennifer Hancock’s poems are attentive to the small gestures we all make—reaching out, touching—they know how we recognize each other most wholly in such moments.  But their intimate physicality opens out to other dimensions, invisible ones, where the force majeure lurking in history or weather or desire begins to take shape like a seeded cloud. These poems move me in their steadfast loyalty to our aching vulnerability—there’s only one day at time here, and you’re only choice is to try and get it right.”       –David Rivard

Excerpt from Between Hurricanes:

This is Not a Test

The horizon trembles,
shoulders its own heavy heart.

We can only offer you provisions
and wish the bag was lighter,

but we cede hope
to the necessity of weight.

This is the expectation
you’ve felt since you were six

when the shrimp boats left Port A.
for good under a late July sky.

We have issued the instructions
you require over the short-wave

in the garage. Hurry—flight
is easiest when the pressure

vacuum lifts enough that you
can slip out the back door.

and intent, the whooping cranes
startled but resolute,

the promise of anything
redolent with oleander.