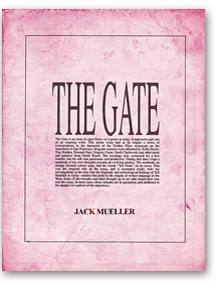 Free PDF!
From the front cover:
The Gate is an essay in open form–or a poem as essay. It represents part one of an ongoing work. This
poetic essay had its origns in a series of conversations in the basement of the Golden Flyer restaurant on
the waterfront in San Francisco. Irregular sessions were attended by Kirby Doyle, Tisa Walden, Howard
Hart, Gregory Corso, Neeli Cherkovski and other poets and painters from North Beach. The meetings only
continued for a few months, but the talk was passionate and productive. During that time I kept a notebook
of my own thoughts towards an evolving poetics. The notebook, an orange German school issue had the
words "Tell Notiz" on its cover. That was the original title of the essay, and it resonated neatly with my
investigations at the time into the linguistic and archeological findings of Tell Mardikh in Syria–studies
that point to the origins of written language in the West. Some of the remarks and ideas brought up in
our talks found their wayinto the essay. In most cases, those remarks are in quotations and attributed
to the speaker (or author) of the statements.   -Jack Mueller