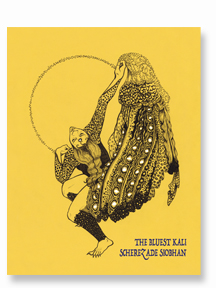 The Bluest Kali
by Scherezade Siobhan

Praise for The Bluest Kali:

"These are poems that are necessary in a world where people of color (specifically, writers of color) are only recently gaining a foothold in a medium where white Eurocentric voices dominate. In the world within Siobhan’s violently vibrant poems, the speaker likens language and communication to a house. “Everything [she] is saying to anyone is an act of describing a house from the inside as someone takes a wrecking ball to it” (15). Such is the reality of a multilingual person, a multiracial person, or a person whose tongue leans towards the “karmic” feeling of a native tongue other than English (21). In building a culture-specific universe of words outside of the so-called “norms” of literary English, a person of color often finds this universe shrunken, collapsed, extinguished in the face of the “standard” and “proper.” Through its welcomingly brazen construction of marginalized identity through language, Siobhan’s collection, then, acts as salve for wounds sustained amidst such rigid linguistic expectations. (read full review here)" –Ina Cariño, Anomaly
—
"A sky like the skin of a "knifed fish." At the poetry reading, the Iraqi poet reads from beneath her headscarf. And beneath this sky, or in the audience at Angeline, unbound, incipient, the poet is a "burning window."  "Hello, weird dirt heart," writes Scherezade Siobhan, the poet we follow through the complex, vibrating territory and registers of (The Bluest Kali). She writes to us  over the ambient sound of "nocturnal insects" and the roar of "massacre": modes of remembrance that are "procedural or volatile."  This powerful and real book opened the space at the back of my heart and then sutured it with lines like: "to be loved like a fir falling to lightning."  Or: "some homes are like the brief pain of papercuts." Yes, I felt these lines in the middle of my own body.  I was receptive to the restructuring -- of reading, of being -- that this book insists upon.  Or invites. I was ready.  Are you?  If this book is a threshold smudged with vermillion powder, then, barefoot, Mira dances on that red dirt.  In the rain, I can't make out the new shapes. Is this "calligraphy"?  Is this the "loosened pond"?  What will it take to never-arrive?  This is a book composed in an intense present -- the "returning wave" --  of trauma, ecstasy, displacement, radical healing and what, in other languages and at other times, was described as love."  –Bhanu Kapil
—
"I admire Scherezade Siobhan's intensity in this marvelous book of poems. Her love of language, acute attention to the world and her feminist intuition propel these poems toward ecstasy. And like a forest fire that burns away dead wood and generous showers that waken dormant seeds these poems are indeed worthy of Kali, gorgeous and deeply blue."  –Khaled Mattawa