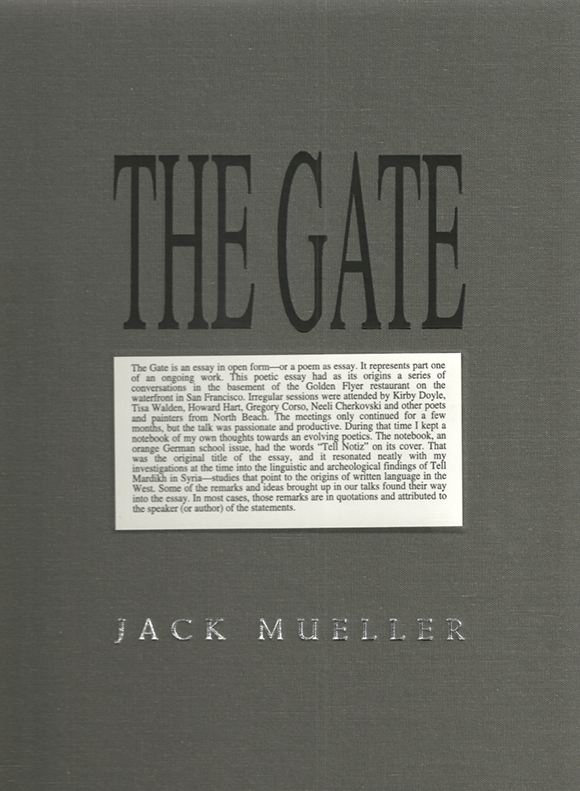 Jack settled into his place at the counter—making ink sketches on 3X5 cards, pointing out the ways of the world, dripping aphorisms and abbreviations. I set some canvas panels, compressed charcoal crayons and pastels on the counter by him. Jack immediately took to the pastels and did up four or fives canvases in short order. He works fast. One canvas is the red and black sketch that appears at the front of Jack’s new book, The Gate, which is now available  here.

‘Of many wordmasters (it was said)’ begins The Gate, a 20-page poem, described in an introductory paragraph as, an essay in open form – or a poem as essay, is an exploration into the origin, evolution, organization and development of Language. Like a sea voyage on a ship of words, the poem does not linearly display the history of written language as much as become that History itself. It is a serpent ride in ancient waters, an organism turning ceaselessly toward the island of wild logos! Gems appear throughout - cobbed from the mind of the poet and from the many minds the poet has known… (what you don’t know, love)  (spiritus ubi vult spirat)  (“life is probably round” – Van Gogh)  (“The apprehension of polarity is the basic act of imagination”)  (wo gehst Du?)  (“Tomorrow I’ll chrysanthemum”) Indeed! This is writing in the Open Field in the tradition of Jack’s great mentors, Robert Duncan, Charles Olson, and Walt Whitman.

Reading The Gate out loud is an invigoration, a verbal workout, a hard trip up the mountain where it all began. It is a continuation of a philosophical discussion Jack has conducted his entire life. It is a poem of Hope with a capitol H. It’s a whale of a good time. The book shipped the other night. My printer, Gary, called at 9:00. He and Giselle greeted me at the door with martinis. The hardcover is beautiful. I’ve been sleeping with it.