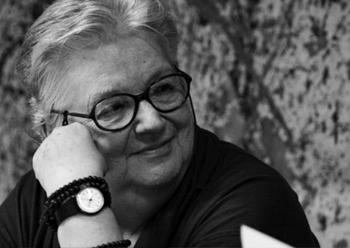 She has also published several collections of visual poetry, starting with Poema & Oggetto, 1974. During the 1980s, she became interested in Eastern philosophy, spending time in Japan and becoming a Buddhist nun in 1990. In 1994, her collection of poems Frisbees--Poesie da lanciare won the Premio Feronia, and in 2017 received the Premio Nazionale Elio Pagliarani for “Lifetime Achievement.” Her most recent collection of poems, Publico & privato, was published by Edizioni Galleria Mazzoli in 2017. Niccolai has also translated the works of American and English writers, such as Lewis Carroll and Gertrude Stein into Italian.